When I was in college, each time that I drove on the interstate highway past a certain Indian reservation, I couldn’t understand why I couldn’t see it. I repeatedly looked at maps to verify that I was looking in the right place. I could not see teepees anywhere. 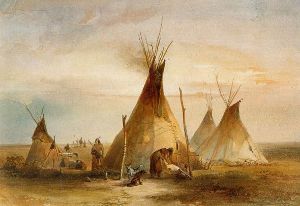 A few years later, I was lost. As I drove along, I saw signs on both sides of the road stating that I was in an Indian reservation. I became super-alert, expecting men to jump out at me from behind the trees, wearing war paint and loincloths, and threatening to attack me with tomahawks.

A few years after that, a friend mentioned that we were passing through an Indian reservation. All I saw was normal homes, and wondered why I couldn’t see where the Indians lived.

How the heck could a High Honors student who was relatively enlightened about world cultures learn to be so dumb? I expected to find teepees inhabited in an area where several feet of snow accumulate, and temperatures drop below zero Fahrenheit. I expected characters from an old wild wild west movie to emerge from the woods near where I had lived for several years. I was so sure that Indians lived in teepees, I didn’t think to ask anyone where the Indians really lived.

Thanksgiving Day in the United States

Today, I say Happy Thanksgiving to my neighbors here in the United States. Although this is a secular holiday, most houses of worship host celebrations of thanks to God this morning. Then, we celebrate our relationship with the Earth by feasting at each other’s homes. It is a time of abundant food and hospitality. We often celebrate with local foods, freshly prepared. We enjoy the colors and textures of a wide variety of foods. The aromas, flavors. Conversations with loved ones.

According to my review of trends on the internet this week, the most common foods for today are herb-roasted turkey, bread stuffing with celery and onions, gravy, cranberry sauce, mashed potatoes, sweet potatoes, green beans, squash, Parker House rolls, and pumpkin and apple pies. We make these from ingredients that are typically harvested at the end of our growing season. This menu is consistent from year to year.

This year, our Thanksgiving coincides with Hanukkah, but I didn’t see much mention of that online.

I like that Thanksgiving continues to relate to agricultural calendars. With the strong global trend toward urbanization, I wonder how long this will continue. Perhaps it will become more of a day of general appreciation.

Regardless of when and why we celebrate Thanksgiving, family and friends are an important element. Even those who are tough to get along with are often invited for dinner. Many people also include strangers in their observance of the day, as we share food so everyone can enjoy a feast.

This tradition of reaching out to strangers may be inspired by remembering the story of Indians welcoming Europeans and teaching them how to survive their first winters here. I have a vivid memory from my childhood of a painting showing Pilgrim men sitting at a table full of food while Indian men stood around and sat on the ground. I like to think that this image conveys the importance of replacing oppression with embracing people of diverse religions, races, sexual orientations, abilities and other differences.

The First Thanksgiving at Plymouth Painted 1914
By Jennie A. Brownscombe
This image is in the public domain

Think of how surprised I was to find that the Wampanoag descendents of the people represented in the painting celebrate this day as National Day of Mourning. They and their supportive neighbors are recalling when they lost their lives, trust, dignity, culture, and land to the intruders. 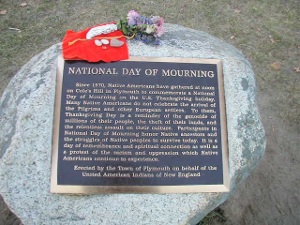 Since 1970, Native Americans have gathered at noon on Cole’s Hill in Plymouth to commemorate a National Day of Mourning on the U.S. Thanksgiving holiday. Many Native Americans do not celebrate the arrival of the Pilgrims and other European settlers. To them, Thanksgiving Day is a reminder of the genocide of millions of their people, the theft of their lands, and the relentless assault on their culture. Participants in National Day of Mourning honor Native ancestors and the struggles of Native peoples to survive today. It is a day of remembrance and spiritual connection as well as a protest of the racism and oppression which Native Americans continue to experience.

Erected by the Town of Plymouth on behalf of the United American Indians of New England. 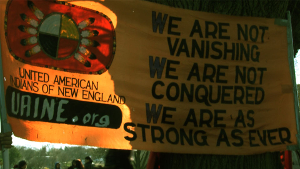 As we recognize the impact of this tragedy, let’s join with the Onondaga Indian Nation during today’s Annual Thanksgiving Circle for Peace and Hope as we celebrate our appreciation for each other and the Earth, and our commitment to work together for healing and justice, for all people and our environment.