When I read that The Ball at Times Square “has become the world’s symbolic welcome to the New Year,” I felt surprised. I never considered that The Ball had such universal meaning. I’ll tell you what I think about when I see The Ball.

I grew up in New York City. Every year, we gathered with family in front of the TV, and watched The Ball drop at Times Square. As soon as The Ball dropped, we blew noise-makers, shook clangers, and hollered outside to welcome in the new year.

When I got older, when I saw The Ball, I thought of movies with formal gowns and tuxedos, caviar and champagne, and crystal chandeliers.

When I moved away from New York City, I surprised people when they found out that I was never at Times Square when The Ball dropped. I never knew anyone who was. I never considered being there. So, I took a friend so he could tick this item off his “Someday” list.

When we got there, I felt delighted by the clutter of the familiar noise of traffic, chatter of people, and cacophony of music. I saw stages set up around the Square — I had no idea that this was how they broadcasted from the site — maybe 30 to 50 feet high. They were temporary platforms projecting from the sides of buildings, with large rooms behind them, perhaps hospitality suites. The celebrities and their guests, crews, and other supporters had comfortable places to go; the temperature was dropping. 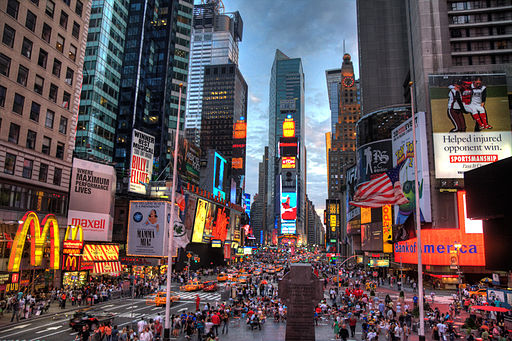 My favorite vendors had push carts that stayed at their assigned street corners from lunch time until late at night. Each one had a smokey open-top oven, and small crinkly paper bags for roasted chestnuts. The aroma was heavenly, and, each time we walked by a chestnut vendor, I breathed in as much of the smoke as I could.

Other vendors walked about. Most passed us by, hawking their wares. One put a sparkly New Year’s Eve hat on my head and got the people around me to say how great I looked. Another attached himself to my friend and me, insisting that we wanted one of his monkey puppets. He kept bringing the price down as he showed what he could do with it. It kicked, bounced, and wiggled as it danced. It laid its long, floppy, soft arms across our shoulders, and looked into our eyes like a homeless puppy. We enjoyed his show until he realized that we really weren’t going to buy one, even “for only 2 dollars 2 dollars 2 dollars”. When another couple showed interest in his show, he attached himself to them.

Finally, the time came for The Ball to drop. Everyone was cheerful as we huddled together. We were warmer now. We shouted out the countdown, and cheered when the ball hit its destination.

Celebrities were clearing from their stages. We began to move to leave. The happy chatter became tense. People pressed more tightly against me. What had been good-humored crowding became frantic urges to flee. People transformed from festive revelry to panic. The police waved their arms, shouted, and insistently told us to back up, but people behind us pushed us forward. People packed tighter around me. The crowd began pulsing forward and back. I thought of recent news stories about people being trampled by crowds, and suddenly I understood how that could happen. As the pulsing waves became larger, I looked on the ground the best I could, to make sure I wasn’t trampling anyone, but if I was, I could not move independently because we had packed together so tightly. We were the throbbing heartbeat of New York City, moving forward and back, forward and back.

At last, I noticed that we were making progress, moving closer to where I wanted to go. Then, I saw that the police had put up saw horses that restricted the width of the streets so cars wouldn’t mingle with us, but those barriers also restricted the flow of people leaving the area. We had squeezed into a bottle-neck.

Eventually, like ketchup, we glugged out of the crowd, out toward the open streets. I welcomed the freedom of the new year, and I welcome that now, as I like to welcome it at the change of each season.

You have probably heard that freedom comes with responsibility. As a member of the crowd, I was not responsible if I trampled someone. I was caught in the heartbeat of the city. Likewise, I wonder how much freedom and responsibility people have in any overwhelming crowd. Perhaps they get caught in its heartbeat.

So, The Ball was a key element of New Year’s Eve as I was growing up, and then a conspicuous spark to one particularly memorable New Year’s Eve. I wonder if you ever think of The Ball during your celebrations this time of year, and if something else is more meaningful for you.

I wonder when and how your year begins.

Weave the fabric of this blog with your thoughts Cancel reply